RAKEHELL - a KNAVE zine.
What follows is a free preview/teaser of the forthcoming issue of Rakehell, most of the character generation tables.

Gog-Moloch, the City of Fire & Industry. Host to the Cathedrahl Tempestuous, slovenly host to the reformed Grand Heliopapcy, bent forever in worship to the apex being of Man--Gog. A city that burns through the child-charnel furnace of ambitious Moloch, making Gog's own people into filth and fuel for the unending fire. A city of the wicked, the iniquitous and the vile.

You have come here, foolishly, and you will toil for the profit of the man-made predators who control your fickle fate. As a blaggard, a knave, a conniving rake, and an utter blackguard, you will carve your name into this wretched rock of a city.

You will not merely survive, you will thrive.

CONTAINS:
Randomizers for your adventurers!

Is this project dead ?

Mostly. The why is a bit cumbersome, but provided below for context. It will be resuscitated, there's a vague timetable for it.

Was writing it pretty well deep into Summer-ish of 2020, then being trapped in New York City, primarily trapped in just my apartment due to how poorly my neighborhood was handling the pandemic kind of soured my desire to write about cities at all for a bit. So I shifted Issue 2 to be more of Issue 1's content, building off stuff I culled until that also became unwieldy; and it was around that point I ran out of some meds due to my doctor passing from said pandemic; and now I'm stuck working on my thesis which is of a type but not so much a continuation as a congruence.

My goal, back to being medicated, second vaccine scheduled for a week from now; is to get Rakehell 2: The War in the Rift and then Gog-Moloch done this year; as I am getting back to having the fighting spirit to do such work. The issue now being other major projects I'm doing to make rent via other publishers.

Its a sticky situation being a literal one-person operation trying to make big books or at least big mechanisms; but the goal is to never abandon them. The city issue, god-willingly, would be done by this autumn.

Apologies for the inconvenience and delay,

It sounds like you're going through a hellish time. Take care of yourself and don't worry about publishing times. Good luck with your thesis, I feel you there. I bought Rakehell #1 recently and it's a great work: you're a talented person. 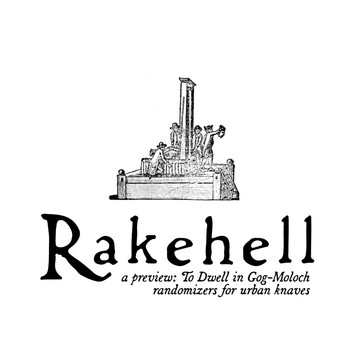