O, Fair Verona... In fair Verona, where many scenes are laid, where ancient grudges break and new mutiny, makes civil blood & civil hands unclean. But such is the tale of vapid feckless youth, and youth of means at that! You've no such privilege, vagrant! And such, Verona is far from fair!

A city, of course. But who could dare think to know the city? Its history is written by the powerful, by the conquerors; its fame is told in tale by foreigners who have never once graced its walls, let alone the shores of its nation. It could be the 1700s, it could be the 1500s; the truth is held only by the minds of petty scribes and corruptible monks; for their only truth is that their pen shall not pen what is truly lived.

Verona is a city, upon the foot of the Lessini and upon the banks of Adige. It existed before the Romans, but they penned their own history; and then it was written of by the Ostrogoths, and then the Lombards; Charlemagne, the Scaligers; and any number of other ruling powers who were as noble as they were contemptible. The truth of their reign is lost, held only in the memories of those who lived through it.

It is a city of intrigue, though no more than any other city can be called as such. It is a city of culture, which is to say that it prides itself better than its neighbors in things that its neighbors pride themselves better than Verona in. There is beauty here, in equal spades to any cruelty. Verona, fair and unfair; and only a fool could think to dare to say they truly know it.

In the grand tradition of people who have never been to Verona, let alone Italy; Verona: Considerations for a 17th Century City-State is a small little snippet sourcebook of random encounters, rumors, and overviews; names and the like.

VERONA is a small setting for use with most anything, ostensibly designed for use with TROIKA! by way of KRIEGSMESSER. It builds off a series of encounters I wrote years ago for a Free RPG Day 2 Adventure entitled: "Mirror, Mirror" which would compliment this setting expansion quite well. Featuring writing by me, Brian Yaksha; and art by a bunch of dead people.

Legal: VERONA is an independent production by the Goatman’s Goblet and is not affiliated with the Melsonian Arts Council. It is ostensibly compatible and designed for use with KRIEGSMESSER, but has no affiliation with that game either. 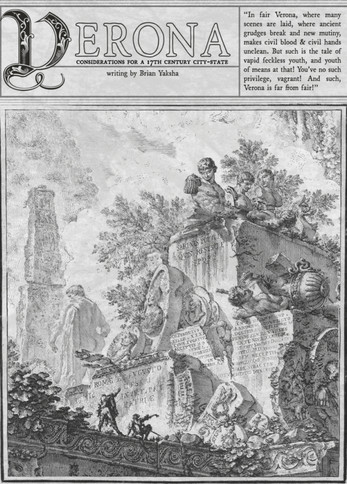 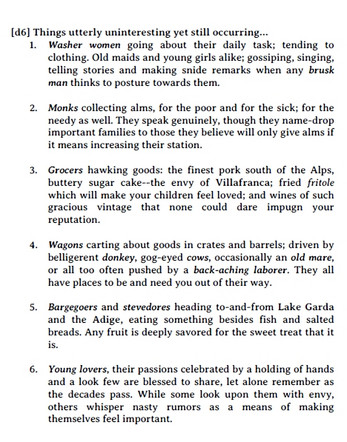 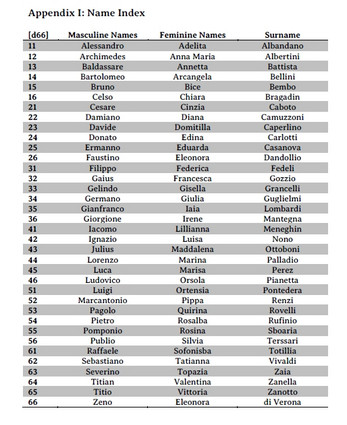